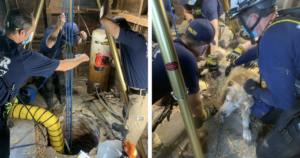 Dickson and Sheryl Patton have an abandoned well on their property that has been there for about 100 years. Yet, they never had a problem with it until their Golden Retriever named Calvin fell into it. The 12-year-old dog wandered off while Dickson was mowing the lawn and fell through the rotted plywood on top of the well.

The Pattons called firefighters for help right away. It was no easy task, but the rescue team worked hard to save the senior dog’s life. Events like this are rare, so it was also a beneficial experience for the fire department.

While Dickson mowed his lawn in Oregon, he realized that Calvin was nowhere in sight. He and Sheryl searched for about two hours before fearing the worst. But then, their other two dogs kept walking near the well, which caused a barking sound to come from deep inside the 30-foot stone-lined pit.

“When he heard them, he started barking from the well and as soon as I heard that I knew what had happened. I started ripping up the rotted plywood and called the fire department,” said Dickson.

Dickson suspects that Calvin chased a squirrel but then fell into the well when he walked on top of the rotted wood. He was trapped down there for at least four hours, and he was likely treading water for most of that time.

When Tualatin Valley Fire & Rescue arrived, they used a tripod and rope system to lower someone down into the well. That person carried Calvin as the other firefighters lifted them back up to the surface so Calvin could reunite with his family.

How is Calvin Doing?

Since the rescue, Calvin went to the vet for an evaluation. The Pattons said that he was treated for hypothermia but is doing well now. He has been released from the vet and is back in his loving home.

“Incidents like this don’t happen very often, so it was a good training opportunity for our technical rescue team,” said Tim Nokes with Tualatin Valley Fire & Rescue. “We can simulate technical rescues similar to that, but it’s not very often where we actually have a 30-foot-deep well we get to send someone down inside.”

The Pattons were also amazed by how professional and efficient the team was. They’re extremely grateful for the firefighters’ skills and dedication. Without their hard work, the innocent senior dog might not have survived much longer.