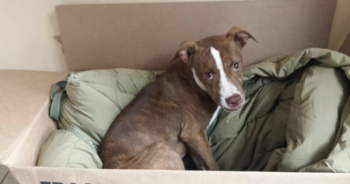 Seven years ago, Chance the Pit Bull mix was attacked by dogs, resulting in a broken jaw. The trauma didn’t just affect her physically; it also left emotional scars. Now, Chance is shy and hesitant around new humans and animals, which aren’t ideal qualities for a shelter dog to have.

Chance has waited at the shelter all these years, hoping to find a forever home. Yet, she gets overlooked year after year due to her breed and shy personality. The shelter is determined to find the family of her dreams as soon as possible!

When The Haven Animal Care Shelter in Lubbock, Texas, found Chance, the pup was being attacked by several dogs. She was covered in scars, and her jaw was broken. Luckily, a Good Samaritan rescued her before the situation escalated further.

“She had her jaw just hanging down, and you could tell by looking at it that she’d have to have surgery and some extensive vet care,” said Dr. Brenda Wilbanks, the shelter’s director and founder.

The shelter helped heal Chance’s physical injuries, but the attack took a toll on her trust. She’s a shy dog who takes a while to warm up to new people and animals. The shelter staff members suspect that her caution results from her early trauma.

Chance has been at the shelter for seven years now. Wilbanks says that people always overlook shy dogs at shelters. Yet, you never know how much a shy dog could grow in a loving home. Those who know Chance strongly believe that she’ll make a loyal companion for someone.

Poor Chance has never had the opportunity to live outside of a kennel. As much as volunteers care about her, it’s difficult for a shy dog to grow in a shelter setting. They hope she can find a quiet home with people who are willing to be patient and earn her trust. Giving her more life experiences will help her come out of her shell.

“She needs somebody to take her on outings and take her wherever and get her hamburgers and ice cream. That’s what people do for some of our other dogs,” said Dr. Wilbanks.

Wilbanks explains that shy dogs can form a special bond with their adopters. Many people find that dogs who are scared at the shelter end up being the best pet they’ve ever had.

Chance is a medium-sized dog who just needs some extra love. If you or someone you know is interested in adopting her, check out her profile on Petfinder. Her perfect family is out there somewhere!

The post Shy Pittie Survives Dog Attack Only To Be Overlooked At Shelter For 7 Years appeared first on iHeartDogs.com.