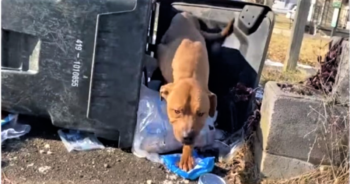 It was chilly in Kentucky last month when Lexington-Fayette Animal Care & Control got a call about a stray dog hiding inside an overturned trash bin. When the responding officer arrived, she saw the cutest caramel-colored pooch peeking out at her from the safety of his makeshift shelter.

He would happily trot over to greet the officer, but any sudden movement sent him darting back to the safety of his “home.” However, the sweet pup could not resist the officer’s assuring words, gentle touch, and copious snacks. After “some time and lots of treats,” she was able to win him over.

Oscar the Great (Not the Grouch!)

Back at the shelter, rescuers could see that the dog had several physical scars to match his emotional ones. He was underweight and desperate for human touch but still very timid. When no one came forward to claim him, staff named him Oscar after the famous trash can dwelling puppet from Sesame Street.

“His name came solely from his love of trash because this guy is definitely not a grouch,” Oscar’s friends at the Lexington Humane Society wrote on Facebook.

During his time at Lexington-Fayette Animal Care & Control, Oscar became a staff favorite, roaming free in the office area while his new friends worked. Here he lived up to his name, “guarding” the office trashcans and digging through in search of discarded treasure. He’d often try to climb inside the bins, but he was a bit too large!

Oscar’s love of trash gave his pals at LFACC a brilliant idea. Knowing that shelter pups thrive on “dog’s day out” excursions, they decided to bring him to the local sanitation department for a visit. There, Oscar met Larry, a sanitation worker, and fellow garbage enthusiast.

Ready For Happily Ever After

His time at LFACC really helped Oscar come out of his shell. He has since been transferred to their partner in rescue, the Lexington Humane Society, where he is waiting to find his forever home.

“This sweet boy had a rough start to life,” an LHS Facebook post reads. “He was underweight and covered in scars when he came into our care. While he is now receiving the best care possible thanks to the staff at LHS, Oscar will still have some of those scars – some visible and some invisible. What we can promise him is he will never have to resort to living in a trash can again. Whether he was seeking shelter from severe weather or abuse, or if someone really did discard him like he was trash, that part of his story is behind him.”

See the heartwarming moment Oscar was rescued from his trash heap:

Are you interested in adopting Oscar? Check out his adoption page for more info!