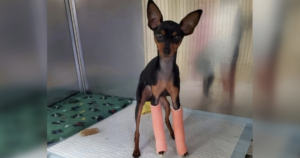 A tiny dog called Radar got his name because of his large ears. Yet, that adorable name helped him find a home that was “meant to be.” While it’s likely just a coincidence, many animal lovers like to think of it as fate.

Radar arrived at Mississippi Animal Rescue League with two broken legs. The rescue didn’t know anything about his past or how his legs were injured, but they knew he must’ve been in a lot of pain. Luckily, many animal lovers stepped up to support him and his recovery process.

Radar was found as a stray before arriving at the shelter. After further medical inspection, Dr. Mary Fooshee found identical breaks in both of his front legs. He went through immediate surgery and had to wear casts during his recovery.

The rescue shared adorable photos of Radar and his casts on social media, and sure enough, many people fell in love with him and wanted to adopt him.

“We had a lot of inquiries. We had over a hundred comments about him and probably about thirty requests for adoption,” said Debra Boswell, the executive director of Mississippi Animal Rescue League.

As staff looked through all the potential adopters, one, in particular, stood out to them. They say all their adoptions are “meant to be,” but this was the most beautiful coincidence possible.

Andrea Wilson is from Mississippi but currently lives in Rhode Island. When she saw Radar, she instantly fell in love. Not only does she have a soft spot for tiny dogs like him, but his name also fits perfectly with her career. Wilson is in the U.S. Navy, and she specializes in sonar and radar work for submarines. The rescue says it’s a match made in heaven.

“As soon as I saw his story, it was just this connection in my heart that I needed him no matter what it took,” Wilson said. “I hope that that encourages people to find a pet to rescue, because this is the most exciting chapter that I’ve had in a long time.”

Radar’s grandparents, who live in Mississippi, are currently caring for him until he heads off to Rhode Island. His aunt is a flight attendant, so she will help him safely travel to his new mom. He has so many kind people supporting his journey, and he’s excited to finally get the love he deserves.