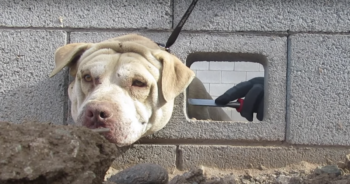 A Phoenix resident was walking down the street when they spotted a troubling sight. An American Pit Bull Terrier mix had gotten his head stuck in the hole of a cement block, and he couldn’t pull himself free. The Good Samaritan called for help, so the Arizona Humane Society came to the rescue.

Freeing the dog from the cinderblock was no easy task, but animal rescuers took on the challenge. They were determined to keep him healthy and safe while figuring out where he came from.

Trapped And In Trouble

The 2-year-old dog named Buddy got his head stuck in the cement wall after noticing another dog. But once he squeezed his head through, there was no way for him to escape on his own. The other dog didn’t care about Buddy’s predicament, and he kept biting the helpless pup on the head.

When a bystander spotted Buddy, they did the right thing by calling for help. Rescuers from the Arizona Humane Society arrived at the scene shortly after and assessed the situation.

“This sweet pup found himself in a potentially life-threatening situation and desperately needed help after getting his head stuck in a cinderblock wall,” Arizona Humane Society said.

The rescuers carefully chiseled away at the cement around the dog’s neck. They broke off piece by piece until the space was big enough for Buddy to squeeze out. It took them about 20 minutes to chisel the cement away.

Back Where He Belongs

Once Buddy was free from the wall, he sprang to life. He ran in circles around his rescuers while his tail wagged like crazy. Then, they brought him to the humane society’s trauma hospital to check his wounds. He had some minor swelling and injuries around his head and neck, but otherwise, he seemed in good shape.

“The dog is one of the friendliest dogs that I’ve ever seen. You would not have imagined he just went through this whole ordeal,” said Francisco Cabella from the humane society.

At first, rescuers assumed Buddy was a stray. But thanks to social media posts from his human, they realized he was lost. Shortly after, he had a beautiful reunion with his mom, and neither of them could contain their excitement. The humane society gave Buddy a microchip to help keep him safe in the future.

Arizona Humane Society reminds people to call for help if they ever see a dog trapped like this. It’s important not to approach the dog since they may act out in a scary situation. It’s safest for everyone if the professionals handle it.

The post Stranger Finds Terrified Dog With His Head Wedged In A Cinderblock appeared first on iHeartDogs.com.