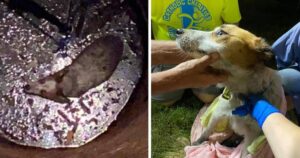 An adventurous pooch named Rico is safe at home with his family after a freak accident almost claimed his life. Out on his own one evening, Rico was walking to a neighbor’s house in the small community of Prairietown, Illinois, when he fell into a 40-foot well.

The local fire rescue reached out to the Edwardsville Fire Department, which has a specialized team for technical rescues in confined spaces. The two groups of heroes came together, working in the dark until Rico was back above ground and free from danger.

“Huge shout out to Edwardsville Fire Department for sending out their confined space/technical rescue team!!! This would have been a different story without you,” the Prairietown Fire Department posted on their Facebook page.

“Edwardsville FD came in and got the little guy out. They used specialized training to go down the well,” they continued.

The Edwardsville technical team created a pulley system by placing a tripod on top of the well. This allowed them to lower a firefighter down into the narrow space. When the rescuer inside the well had Rico in his arms, the other firefighters engaged the pulley to bring them back to safety.

Once at the surface, Rico was wrapped in a blanket and greeted by overjoyed firefighters who reported the pup was “happy to see everyone once he was freed.” Despite the death-defying drop into the well, Rico was not seriously injured.

A Happy Ending For All

The Prairietown Fire Department called the incident “one of those calls that remind us why we do this.”

“Why when the pager goes off during dinner, bedtime stories with our kids, or family events we go running out the door,” they added. “When we got a call about Rico being down a 40 ft well we all feared the worst. We called Edwardsville Fire Department in for some help and with their heroic efforts Rico is safe and giving us doggy kisses!!!”

Rico’s parents, Paul and Susan Miller, were on the scene to shower their boy with relieved hugs and kisses. Paul commented that the dog’s survival without any injuries is a “miracle.”

“A huge thank you to all the rescue workers who got Rico out safe and sound,” he said. “This morning he acts like nothing ever happened. Amazing!”

Rico and his family are clearly grateful to the Prairietown and Edwardsville Fire Departments. However, this close call is a good reminder of how important it is to keep dogs on a leash when outside the home. It’s a big world, and there are so many potential dangers out there for a little dog.