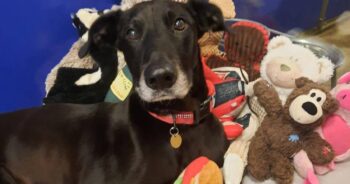 Two years ago in 2019, a fiercely loyal dog named Dillon was found lying beside his deceased person. The poor pup refused to leave the man’s side, “still protecting his body until the very end.”

This devoted 9-year-old canine now resides at a National Animal Welfare Trust (NAWT) shelter in Cornwall, England. Alone in his kennel, there’s no permanent person to appreciate his love and dedication.

“He was found lying with his owner who had passed away and was obviously protecting him right up until he couldn’t anymore — which was very sad.”

Even though it’s clear this loving dog makes a great companion, Dillon has yet to find a new permanent home. The shelter still remains confident that the perfect family is out there for him, ideally a personal attention situation like his previous one.

“He came to us about two years ago from that situation, which is what Dillon wanted and needed, but we’ve been trying to find the right one for him, the right home and family.”

The Right Home Is Out There For Dillon

There are so many different dog owners out there, and they live in different-sized homes and with varying-sized families. All Dillon needs is someone who will appreciate his loyalty and energy.

Unfortunately, Dillon’s “puppy at heart” personality works against him in some ways. Previous foster parents have found him too energetic for their personal preferences, especially as he’s nearly ten years old.

“The thing with his age is he attracts people looking for more of a dog that sits with you, whereas Dillon in his heart is still a bit of a puppy. He will settle down with you and relax too, but he likes to go out in the fields and have a nice walk — after which he likes to just chill,” Hall said.

Another factor holding back his adoption potential is that Dillon can’t go to a home with children or other dogs. Silver lining: NAWT says this is because he’s so dedicated to his people he can become a little “possessive.”

The shelter has been working on teaching him to get along with other dogs, first starting him off on walks with a muzzle.

“We actually sent him out to a foster home a while ago with other dogs, and he got on fine there, absolutely fine, but when they were in the home together, he wasn’t too happy — he likes his owner to himself.”

Hall put a positive spin on this trait of Dillon’s, comparing him to Friends’ Joey Tribbiani:

Congratulations to Dillon! He found his forever home just in time to spend Christmas with his brand new family!! NAWT posted the adorable video below to see him off!

Day 17 is here and we told you it would be worth the wait… today was the happiest of days as we saw Dillon finally head home with his new family just in time for Christmas! Thank you to everyone who supported us on this journey, and a huge thank you to Dillon’s new owners for taking a chance and working with this amazing one of a kind boy to give him the home he deserves.
It was tears all round as Dillon and his Santa sack of toys headed out those doors for one last time.
Merry Christmas Dillon! We miss you already bud!

The post UPDATE: Dog Found Guarding Deceased Owner Has Been Without A Home For 2 Years appeared first on iHeartDogs.com.