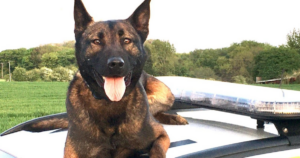 Just like how not every human is suited to be a police officer, not every dog is fit to be a police pup. It takes a specific temperament and disposition to make a great k-9. Or a specifically trained dog that assists law-enforcement personnel.

It is incredibly important that a k-9 master the proper skills, as they often find themselves facing danger head-on from the front lines.

PD Luna, a beautiful five-year-old Belgian Malinois, has exactly what it takes to apprehend all kinds of suspects. In fact, she’s been working for the South Yorkshire Police for the last year and recently had a pretty incredible take-down. Lucky for all of us, police dashcam footage captured the moment she helped detain a dangerous driver. So, we get to watch it all go down via the video.

Shortly after spotting some heavily tinted windows on an Audi A3, police pulled over the vehicle to investigate. But, what started out as a routine traffic stop, soon turned into a high-speed police chase. Moments after the officers approached the car, the Audi A3 sped away. The officers then raced back to their patrol vehicle and began their pursuit.

Over the course of the 15-minute chase, the driver travelled at frightening speeds through residential streets, sped through red lights, and drove on the wrong side of the road around a roundabout. The vehicle reached speeds exceeding 90mph. Plus, not only had the suspect been disqualified from driving until November 2022, he openly admitted in an interview that he was drunk during the incident.

“Dashcam footage shows the vehicle travelling at crazy speeds through a number of residential streets, and even going through a crossroads at Woodbourn Road when the lights were on red,” said Sergeant Jake Broughton.

A number of other officers joined the chase, and together they actively pursued the vehicle. Ultimately, the Audi A3 reached a dead end, and the driver was forced to flee on foot. This is when PD Luna went to work and apprehended the driver. As the police officers lept from their patrol cars, she ran ahead and had him on the ground in no time.

“This was a shockingly irresponsible incident where innocent members of the public could quite easily have been seriously injured or even lost their lives,” said Sergeant Jake Broughton.

It was around 4:30 am when PD Luna could be seen holding the suspect down on the ground. The driver was sentenced to 21 months in prison for dangerous driving and an additional six months for disqualified driving. Not only has PD Luna been trained with the proper skills to apprehend offenders, but she is also trained to track scents and has the ability to find missing people and property.

“She has helped detain suspects in burglaries, thefts and even those carrying knives and firearms. I am very grateful to have such an amazing dog to be my partner and I know she will always protect me. I look forward to many more years of fighting crime together with her,” says her handler, PC Matt Aris.

You can watch the dashcam video below.