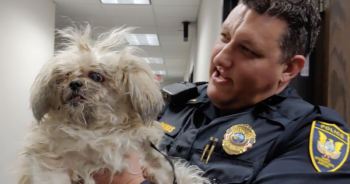 Small dogs regularly fly on planes with their humans, but it’s important to research the airline rules before bringing them along. One woman at the Tampa International Airport didn’t plan ahead. She wanted to take her elderly Shih Tzu with her on a flight to Miami. But when an employee asked her for the dog’s vaccination records and boarding fee, the woman said she’d make other arrangements instead.

Yet, no arrangements were made for the dog. The woman abandoned him at the airport shortly after, not taking the time to consider other options. Security footage captured her running off to her flight without looking back at the innocent pup.

Alone at the Airport

A woman known as Elizabeth arrived at the airport, expecting to bring her 14-year-old dog named Bama with her. But when she found out the airline needed paperwork and a fee, she bailed on Bama immediately. She let go of the confused dog’s leash near the ticket counters and quickly walked away from him to board her flight.

“It’s dangerous to leave a dog at the airport,” said Tampa Airport Police Chief Charlie Vazquez. “We have the doors that open and close; the dogs can go out there and get hit by cars, which has happened before. We don’t want it to happen again. She should have found a reputable rescue group and contacted them.”

But as it turns out, Bama had experienced neglect before that moment. When rescuers saved him, they saw that he was severely matted with ear infections, overgrown nails, rotting teeth, and a tumor on his back.

Airport security contacted VIP Rescue, an organization in central Florida. Corinn Smith from the rescue took the dog into her care, and his state was even worse than she had imagined.

A Second Chance for Bama

Smith scheduled a grooming appointment for Bama as soon as possible. They had to shave his coat to get rid of all the painful mats. The rescue is also working on tending to his many medical needs. They found out that he had a microchip, which is how they discovered his name and age.

“He was in a really bad shape. He’s matted, he’s got ear infections, he’s got his teeth are infected, he’s got a tumor on his back,” said Smith. “The woman needs to be prosecuted to the fullest extent of the law, there’s no excuse for this.”

During all of Bama’s long overdue care, Smith fell in love with the precious senior. She decided to adopt him to ensure that he’ll live out the rest of his days in a loving home.

The airport has the woman’s information, and they have access to security footage that shows her abandoning the dog. So, staff members are working with the state attorney’s office to see if they can press charges. Dogs are family members, so you can’t leave them behind like this, no matter the excuse. At least Bama will finally get to feel loved and respected in his new home.

The post Woman Abandons Heartbroken Dog At Airport So She Doesn’t Miss Her Flight appeared first on iHeartDogs.com.